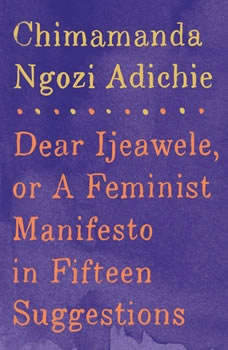 Dear Ijeawele, or A Feminist Manifesto in Fifteen Suggestions

From the best-selling author of Americanah and We Should All Be Feminists comes a powerful new statement about feminism today--written as a letter to a friend.

A few years ago, Chimamanda Ngozi Adichie received a letter from a dear friend from childhood, asking her how to raise her baby girl as a feminist. Dear Ijeawele is Adichie's letter of response.
Here are fifteen invaluable suggestions--compelling, direct, wryly funny, and perceptive--for how to empower a daughter to become a strong, independent woman. From encouraging her to choose a helicopter, and not only a doll, as a toy if she so desires; having open conversations with her about clothes, makeup, and sexuality; debunking the myth that women are somehow biologically arranged to be in the kitchen making dinner, and that men can "allow" women to have full careers, Dear Ijeawele goes right to the heart of sexual politics in the twenty-first century. It will start a new and urgently needed conversation about what it really means to be a woman today.

“Abby is a relatable revolutionary — with WOLFPACK, she inspires the confidence, leadership and sisterhood we all so desperately need right now.” — Amy SchumerThis program is read by the author.Based on her inspiring, viral 2...

We Should All Be Feminists
by Chimamanda Ngozi Adichie

The highly acclaimed, provocative New York Times bestseller from the award-winning author of Americanah, “one of the world’s great contemporary writers” (Barack Obama). In this personal, eloquently-argued essay&...

The Arrangements
by Chimamanda Ngozi Adichie

The Arrangements is a short story originally published for The New York Times Book Review, which commissioned Adichie to “write anything about this election you like.” The story focuses on Melania Trump and is a homage to Virginia Woolf&...

Whose Story Is This?
by Rebecca Solnit

Who gets to shape the narrative of our times? The current moment is a battle royale over that foundational power, one in which women, people of color, non-straight people are telling other versions, and white people and men and particularly white me...

Feminism for the 99%
by Cinzia Arruzza

This is a manifesto for the 99 percent Unaffordable housing, poverty wages, inadequate healthcare, border policing, climate change—these are not what you ordinarily hear feminists talking about. But aren't they the biggest issues for the vast...

We Should All Be Feminists
by Chimamanda Ngozi Adichie

The highly acclaimed, provocative New York Times bestseller from the award-winning author of Americanah, “one of the world’s great contemporary writers” (Barack Obama). In this personal, eloquently-argued essay&...

I'm Only a Child
by Wanda Montanelli

Child brides sold as objects, with a rite of marriage or a simple exchange of money, to people of adult age, suffer real abuse, an act which aids paedophilia. The parties responsible are the families, which oblige their daughters to enter into force...

A new manifesto for cyberfeminism The divide between the digital and the real world no longer exists: we are connected all the time. How do we find out who we are within this digital era? Where do we create the space to explore our identity? How ca...