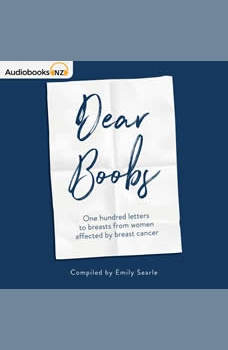 Dear Boobs: One hundred letters to breasts from women affected by breast cancer

A shock diagnosis. Breast surgery ahead. What would you say to your boobs?

It all began with one woman and the letter she wrote to her wobbly, womanly parts during treatment for breast cancer. Ninety-nine other women have since added their innermost thoughts to form this intimate collection of revealing letters.

The 'Dear Boobs Project' was the mission of Emily Searle. Emily compiled 100 letters to boobs, written by women of all ages and stages, each personally affected by breast cancer. It was book Emily found to be missing during her own healing journey - a sisterhood she wanted to share.

The hardback edition has been lovingly delivered to waiting rooms far and wide, where it is hoped these letters shall be read, and provide comfort and insight for years to come.

The nature of Dear Boobs lends itself beautifully to being read aloud, adding another level of accessibility to these tales of courage, survival and, ultimately, love.

This audiobook could not have been possible without the generosity of Lee Smith-Gibbons (narrator), Audiobooks New Zealand (production and distribution) and our wonderful sponsor Brilliantly.co.

In the autumn of 1994, Michael Korda was diagnosed as having prostate cancer. For several years, he had been examined, tested, and medicated, always with the assurance that everything was all right - until it wasn't. But the discovery of the actua...

You cannot undo this, one of the surgeons told me, you have to be sure. I was sure. My choices were frightening, grim and daunting. I possess the rare Breast Cancer genetic mutation BRCA2 and I saw it as a death sentence. My choi...

Let Me Get This Off My Chest
by Margaret Lesh

Just Show Up
by Kara Tippetts

Survivors from all walks of life talk about what “living strong” in the face of cancer means to them. Since the now ubiquitous LIVESTRONG™ wristbands became available in May 2004, the Lance Armstrong Foundation has raised more than...