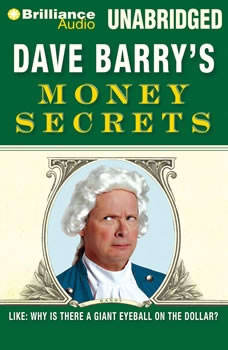 Dave Barry's Money Secrets: Like: Why Is There a Giant Eyeball on the Dollar?

Did you ever wish that you really understood money? Well, Dave Barry wishes that he did, too. But that hasn’t stopped him from writing a book about how to understand money. In it, Dave explores (as only he can) such topics as· How the U.S. economy works, including the often-overlooked role of Adam Sandler.· Why it is not a good idea to use squirrels for money.· Strategies that will give you the confidence you need to try for a good job, even though you are, let's be honest, a no-talent loser.· Why corporate executives, simply by walking into their offices, immediately become much stupider.· An absolutely foolproof system for making money in the stock market, requiring only a little effort (and access to time travel).· Surefire tips for buying and selling real estate, the key one being: Never buy, or for that matter sell, real estate.· How to minimize your federal taxes, safely and legally, by cheating.· Why good colleges cost so much, and how to make sure your child does not get into one.· How to reduce the cost of your medical care by basically not getting any.· Estate planning, especially the often-overlooked financial benefits of early death. But that's only the beginning! Dave has also included in this book all of the important points in a book written by Donald Trump, so you don't have to read it yourself. Plus he explains how to tip; how to negotiate for everything, including bridge tolls; how to argue with your spouse about money; and how much allowance to give your children (three dollars is plenty). He also presents, for the first time in print anywhere, the Car Dealership Code of Ethics ("Ethic Seven: The customer is an idiot"). Also there are many gratuitous references to Angelina Jolie naked. You can't afford NOT to buy this book! Probably you need several.