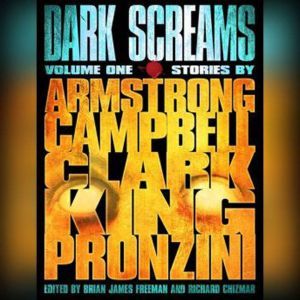 "Weeds" by Stephen King: When a meteorite lands on his property, Jordy Verrill envisions an easy payday. Unfortunately for Jordy, this is no ordinary rock—and the uncompromising force inside has found its first target. "The Price You Pay" by Kelley Armstrong: Never pay more than you owe. Sounds like easy advice to follow. But for Kara and her childhood friend Ingrid, some debts can never be repaid . . . especially those tendered in blood. "Magic Eyes" by Bill Pronzini: Edward James Tolliver has found a weary sort of asylum among the insane. He knows he's not one of them—but how can he tell anyone about the invaders without sounding that way? "Murder in Chains" by Simon Clark: Imagine awaking to find yourself in an underground vault, chained by the neck to a murderous lunatic, a grunting goliath who seems more animal than man. "The Watched" by Ramsey Campbell: Little Jimmy gets a glimpse of the cold truth when he finds out that it's not always what you see that can get you into trouble; it's who knows what you see.