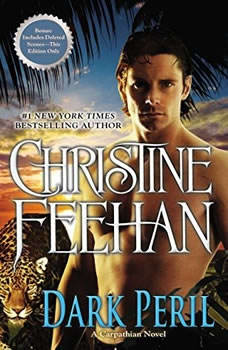 Dominic, of the Dragonseeker lineage—one of the most powerful of the Carpathian lines—is desperate to go to the very heart of the enemy camp and learn their plans. There’s only one way to do so: ingest the parasitic blood of a vampire. He knows that it is a mission from which there is no return. With little time before the blood takes effect, he’ll get the information he needs, relay it to the leader of the Carpathians, and go out fighting. There is no more honorable way to end his life.Solange Sangria is one of the last of the jaguar people, a royal pureblood, a dying species that cannot recover from bad decisions made over hundreds of years. She has long been alone, fighting to save the remaining shapeshifters from the hands of Brodrick the Terrible: her own father, who slaughtered her family and everyone she loved. Wounded and weary, she plans one last battle, hoping to stop the man who has made an alliance with the vampires, accepting that she will not come out alive.They are two warriors who have lived their lives alone. Now, at the end of their time, they find each other—an obstacle neither saw coming, and which neither can hope to ignore.

How many times do we hear of anyone following exactly the career path that they always dreamed of? For author, Christine Feehan, the dream came true. She talks about how she always wanted to be a writer, as far back as she can remember. She began writing at a very early age, and required her sisters to read each of her works before being sent to a publisher. Currently, her daughters help with that job......to edit and critique the work before it is submitted for publication. That is called literally, keeping it all in the family.

Feehan has always loved family time. She came from a huge family and she and her husband, Richard, had a blended family with 11 children. She is a strong advocate of women helping each other. During one period in her life, she learned self-defense, then taught it to women who had been abused.

Feehan is a consistent #1 New York Times bestselling author, with over 70 published novels. These also include five series....... Dark Series, Ghostwalker Series, Leopard Series, Drake Sisters Series, the Sisters of the Heart Series, and Torpedo Ink. In her own words......."I've been a writer all my life......it is who I am. I write for myself and always have."