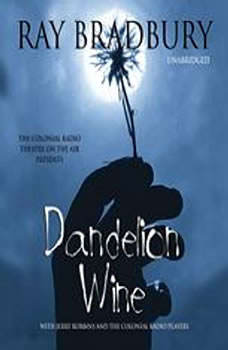 Ray Bradburys endearing, lyrical tale of boyhood and an idyllic Midwestern summer is presented here as a fullcast audio dramatization by The Colonial Theatre on the Air, complete with sound effects and a brilliant music score.M

Twelveyearold Douglas Spaulding knows Green Town, Illinois is as vast and deep as the whole world that lies beyond. For Douglas, summer is a pair of new tennis shoes, the first harvest of dandelions for Grandfathers renowned intoxicant, the distant clang of the trolley bell on a hazy afternoon. But, as young Douglas is about to discover, summer can be more than the repetition of established rituals that hold time at bay. It can be a best friend moving away, a human time machine that can transport you back to the Civil War, or a sideshow automaton able to glimpse the bittersweet future.