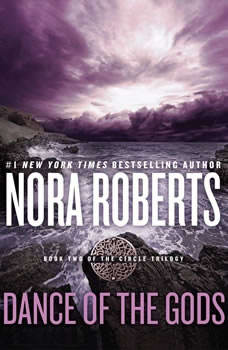 Dance of the Gods

Second in the Circle Trilogy from the #1 New York Times bestselling authorRaised in a family of demon hunters, Blair Murphy has her own personal demons to fight—the father who trained, then abandoned her, and the fiancé who walked out on her after learning what she is. Now she finds herself training a sorcerer from 12th century Ireland, a witch from modern day New York, a scholar, and a shape changer from the mythical land of Geall, while trying to keep herself from staking the sixth of their circle and host: a vampire sired by Lilith, the vampire queen they’ve been charged with defeating on Samhain.No stranger to butt-kicking, Blair finds herself taking a good whipping when it comes to that handsome and flirtatious Geallian, Larkin. And a couple of run-ins with Lilith’s right-hand gal gives Blair more than she reckoned for, mentally and physically. But will she be able to stay afloat long enough to defeat Lilith’s loyal in pre-battle bouts? Or will she find herself falling for the one thing she vowed never to give in to again? If the vampires don’t do her in, Larkin is certainly up to the task.

Another great installment to this amazing trilogy. Dance of the Gods is energetic and spellbinding in its storytelling. The Circle of Six are still training, fighting and loving one another as they try to battle against the Vampire Queen, Lillith. In this installment, you also watch the developing love story of demon hunter Blair and the shapeshifter Larkin. As you read you don't want to put the book down because it's imperative that you find out what happens next. You'll love it.

Blair is my favorite character, so this being her love story, was my favorite. I'd love a series just dedicated to her and her vampire hunting family prior to this books beginning. I'd even settle for her life after the series ends. She's my favorite demon hunter of all paranormal romance novels. Her relationship with each character is different and amusing see her and Cian. Larkin is a good match, with his fun loving, quick humor ways.

I love vampire stories, and Nora told a great one. The characters are great. They form and wonderful friendship that you wish you were a part of.