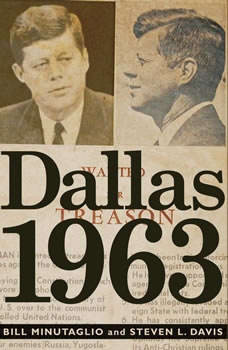 Dallas 1963: Patriots, Traitors, and the Assassination of JFK

Winner of the PEN Center USA Literary Award for Research NonfictionNamed one of the Top 3 JFK Books by Parade Magazine. Named 1 of The 5 Essential Kennedy assassination books ever written by The Daily Beast. Named one of the Top Nonfiction Books of 2013 by Kirkus Reviews.In the months and weeks before the fateful November 22nd, 1963, Dallas was brewing with political passions, a city crammed with larger-than-life characters dead-set against the Kennedy presidency. These included rabid warriors like defrocked military general Edwin A. Walker; the world's richest oil baron, H. L. Hunt; the leader of the largest Baptist congregation in the world, W.A. Criswell; and the media mogul Ted Dealey, who raucously confronted JFK and whose family name adorns the plaza where the president was murdered. On the same stage was a compelling cast of marauding gangsters, swashbuckling politicos, unsung civil rights heroes, and a stylish millionaire anxious to save his doomed city.Bill Minutaglio and Steven L. Davis ingeniously explore the swirling forces that led many people to warn President Kennedy to avoid Dallas on his fateful trip to Texas. Breathtakingly paced, DALLAS 1963 presents a clear, cinematic, and revelatory look at the shocking tragedy that transformed America. Countless authors have attempted to explain the assassination, but no one has ever bothered to explain Dallas-until now.With spellbinding storytelling, Minutaglio and Davis lead us through intimate glimpses of the Kennedy family and the machinations of the Kennedy White House, to the obsessed men in Dallas who concocted the climate of hatred that led many to blame the city for the president's death. Here at long last is an accurate understanding of what happened in the weeks and months leading to John F. Kennedy's assassination. DALLAS 1963 is not only a fresh look at a momentous national tragedy but a sobering reminder of how radical, polarizing ideologies can poison a city-and a nation.