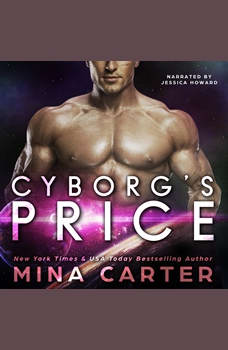 He's one of the most dangerous creatures in the galaxy... so why can't she keep her hands off him?

A junior nurse aboard the Combined Fleet Ship Valkyrie, Samara's days are usually filled with minor bumps and scraps and the occasional health or workspace check. But when a dangerous prisoner is transferred aboard, she finds herself on brig duty. Dealing with the big, lethal looking military grade cyborg should be terrifying, but one look into his green eyes and she can't think of anything other than what his big, hard body would look like under the grey ship suit...

She's small, soft...and his enemy. He should keep his hands to himself and forget her.

Captured and en route to a medical facility for dissection and study, cyborg Lyon expects nothing but pain and degradation from his captors. But Samara isn't like the others, treating his wounds with care and igniting a fire deep within. When she neglects to ensure his cuffs are locked tight, all hell breaks loose. A hot, sensual hell against the cell wall. When his team arrives, Lyon knows he should walk away...but he can't. His little human has gotten under his skin. He'll take her as payment for his suffering, keep her in his bed and pleasure them both for as long as he has breath left in his body.

However, the universe, and the Fleet, have other ideas. A tracker on board brings a horde of fleet ships down on their heads. Can Lyon and Samara survive betrayal, a fleet attack and their own suspicions, or will their happily ever after disintegrate under fire?