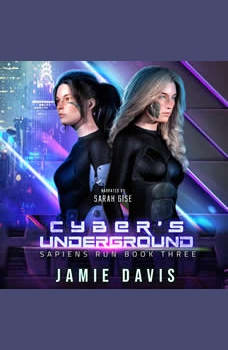 Her body is encoded with a secret. To expose the truth, she may have to give her life…

America, 2055. Cass Armstrong fears the same cybernetic enhancements that saved her could become her undoing. On the run with her girlfriend, the information encrypted in her implants act like a beacon for the tech-phobic terrorists hot on their trail. And her only way out is to find someone to rewrite her identity…

Forced to seek aid from underworld hackers, Cass must become a criminal to survive. But if she doesn’t meet their demands, the pack hunting her will permanently erase her last hope of bringing their extremist agenda to an end.

Cyber’s Underground is the pulse-pounding third book in the Sapien's Run cyberpunk trilogy. If you like gritty heroines, fast-paced action, and standing up for diversity, then you’ll love Jamie Davis’s thrilling adventure.