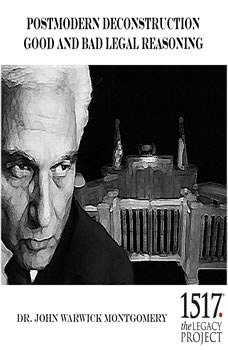 An analysis and critique of "deconstructionism" in the field of law, and a sometimes hilarious examination of examples of lawyers’ reasoning.

Welcoming the Stranger
by Matthew Soerens

Immigration is one of the most complicated issues of our time. Voices on all sides argue strongly for action and change. Christians find themselves torn between the desire to uphold laws and the call to minister to the vulnerable. In this book World...

WHOSE LIFE IS IT ANYWAY? An examination of legal and ethical issues surrounding the questions of suicide and assisted suicide. November 1997. ISSUES IN HEALTH CARE: RIGHTS OF THE UNBORN This lecture is based on the prize-winning essay, "The Rights ...

A Lawyer's Case For Christianity
by John Warwick Montgomery

Dr. Montgomery's brief for the truthfulness of Christianity, using legal standards of evidence. Given at the University of Calgary, in Calgary, Alberta on November 15, 1991.

A treatment of the concepts of "law", "gospel" and the classic "three uses of the law", together with their application to the crucial question of the appropriateness of legislating a "Christian agenda" in a pluralistic society.

When Is It Right to Die?
by Joni Eareckson Tada

More and more people who are terminally ill are choosing assisted suicide. When is it Right to Die? offers a different path with alternatives of hope, compassion, and death with real dignity. Joni Eareckson Tada knows what it means to wrestle with t...

What can one know about God from a study of the world around us, and how can this study prepare us for a special revelation from God?

Search for Absolutes - A Sherlockian Inquiry
by John Warwick Montgomery

Sherlock Holmes and his faithful companion Dr. Watson embark on an inquiry searching for ultimates. A keynote lecture delivered by Dr. Montgomery, a member of the Sherlock Holmes Society of London, at the 24th Annual Philosophy Symposium of the Cali...

Win Your Case
by Gerry Spence

What's true for training great trial lawyers is true for all winning presentors. According to renowned trial attorney and bestselling author Gerry Spence, presenting a case before decisionmakers is not simply a technique but an occasion for summonin...

The Art Of War
by Sunzi