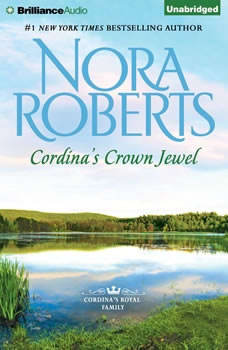 From New York Times bestselling author Nora Roberts comes a tale of royal intrigue and unexpected love.For a few precious weeks, Her Royal Highness Camilla de Cordina could be just plain Camilla MacGee. Working in rural Vermont for the devastatingly handsome and utterly cantankerous archaeologist Delaney Caine is the perfect refuge. But Camilla's irritation with the man soon turns into fascination, then desire, and the royal runaway knows she'll have to confess. Would Del see her as a woman to be loved, or dismiss her as a royal pain?

The MacGregor Grooms
by Nora Roberts

In this classic romance from New York Times bestselling author Nora Roberts, one woman will discover that love has the power to overcome all barriers.From the moment she met him, Keeley Grant knew there was something wild about Brian Donnelly. He da...

Word gets around fast in Eclipse Bay. Nick Harte should know—his family's legendary feud with the Madisons fueled the local gossip mill for years before finally cooling off. But people are still talking—and rumor has it Nick's involved w...

The MacGregor Brides
by Nora Roberts

#1 New York Times and USA Today bestselling author Nora Roberts enchants again with this beloved classic about the passionate and headstrong MacGregor family.Daniel MacGregor is at it again.At age ninety, there is nothing the powerful patriarch of t...