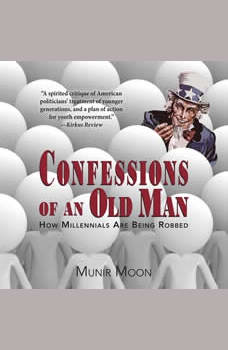 Confessions of an Old Man: How Millennials are Being Robbed

The future is being stolen from the millennial generation. Baby boomers have much to answer for: a legacy of economic instability, poor job growth, and an environmental disregard. Confessions of an Old Man is a statement of collective guilt that places the responsibility on the author's generation for dealing a bad card to its children.

The elections of 2018 and 2020 will be the most significant elections of this generation. The US House of Representative is filled with aging representatives (many of whom have held office for at least 20 years have become part of the permanent political class) who are out of touch with the priorities of the coming generation. At least 51 incumbent congresspersons are not seeking reelection in 2018—a record and the best chance for turnover in congress. We can effectuate change. Now is the time. This book challenges the MI Generation to take charge of its destiny or have the future decided by rich old white men.

This is a call to action for the MI generation (defined as those born between 1980 and 2018) - a generation with the most to lose if the United States continues with its current domestic and foreign policies. Millennials are paying the bills for their parents' neglect and they must have a say in their own future. Confessions of an Old Man is also a call to those parents and grandparents who want to leave a better America for their children and grandchildren.

The generation into which each person is born, the demographic composition of that cohort, and its relation to those born at the same time in other places influences not only a person's life chances, but also the economic and political structures wi...

Ethiopia and the Origin of Civilization
by John G. Jackson

This essay is an effort to highlight the influence of Ethiopia in the history of Civilization. It also devotes consider time to suggesting that Ethiopia’s contribution has been either misunderstood or intentionally ignored by mainstream histo...