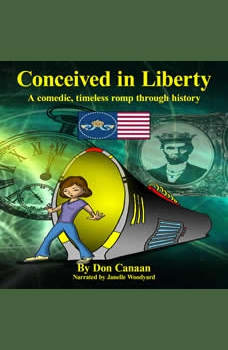 Conceived in Liberty: A comedic, timeless romp through American history

Conceived in Liberty is a time-traveling romp through the Union of Royal American States’ history.

See how King Benedict Arnold rid us of the traitor George Washington.

This tale of murder, incest and undocumented aliens is our history, but history is just a tenuous thread.

Arnold Toynbee once said: “History is just one damned thing after another.”

We have been taught about Mobius’ victory over King Benedict. But who was Mobius? Was he the son

of Tad Lincoln in 1863 or the illegitimate son of George Washington in 1776? And who was his mother?

files. Now we can finally reveal Tamar’s mission and how she prevented the depopulation of Earth.

Spaced Out
by Don Canaan

We first meet Baby, a 10-year-old Jewish boy, abused by his mother, when he learns that his GI father has been killed in Europe during a World War II battle. This shocking news, as well as the Nazi extermination of six million Jews, transforms ...

A Long Cloud
by Sarah Woodbury

King Arthur lives, but the war isn't over, and distinguishing between friends and foes has never been more difficult. A Long Cloud takes Myrddin and Nell into England. And it is there, in the heart of Modred's domain, that the truth about ...

Cold My Heart
by Sarah Woodbury

Love. Magic. Faith. By the autumn of 537 AD, all who are loyal to King Arthur have retreated to a small parcel of land in north Wales. They are surrounded on all sides, heavily outnumbered, and facing near certain defeat.But Myrddin and Nell, two of...

"Entangled," a stand-alone novella, concludes the battle of good vs. evil that permeated the series of "Daddy's Girl," "Pretty Little Girl" and "The Baby Thief." "Entangled" will reveal answers to questions raised in the earlier books (availabl...

The Oaken Door
by Sarah Woodbury

The onslaught of Modred's forces may have been temporarily halted, but danger lurks around every corner for Myrddin and Nell. Not only do they face treachery on the part of their enemies, but allies--and even family too--cannot be trusted.Only by jo...

Frost Against the Hilt
by Sarah Woodbury

Love, magic, faith. All roads lead to Camlann as Arthur gathers his men for a single battle--a final great contest against the full might of Modred and his Saxon army. Wales will win all or lose all in one last throw of the dice.Frost Against the Hi...

Of Men and Dragons
by Sarah Woodbury

Myrddin is overjoyed to have been joined by a son he never knew he had, but he struggles to come to terms with his dreams and faces treachery on every side in his quest to save King Arthur from the fate that awaits him. Nell, in turn, must choose be...