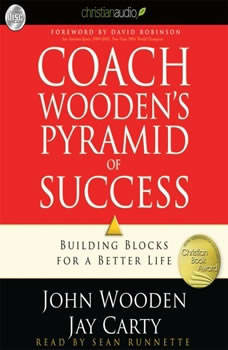 Legendary college basketball coach John Wooden and Jay Carty know that when it comes down to it, success is an equal opportunity player. Anyone can create it in his or her career, family and beyond. Based on John Wooden’s own method to victory, Coach Wooden’s Pyramid of Success reveals that success is built block by block, where each block is a crucial principle contributing to life-long achievement in every area of life. Each of these 32 daily readings takes an in-depth look at a single block of the pyramid, which when combined with the other blocks forms the structure of the pyramid of success. Join John Wooden and Jay Carty to discover the building blocks and key values—from confidence to faith—that have brought Coach to the pinnacle of success as a leader, a teacher and a follower of God.