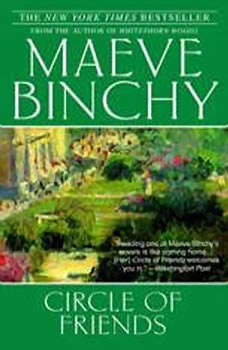 It began with Benny Hogan and Eve Malone, growing up, inseparable, in the village of Knockglen. Benny--the only child, yearning to break free from her adoring parents... Eve--the orphaned offspring of a convent handyman and a rebellious blueblood, abandoned by her mother's wealthy family to be raised by nuns. Eve and Benny--they knew the sins and secrets behind every villager's lace curtains...except their own.

It widened at Dublin, at the university where Benny and Eve met beautiful Nan Mahlon and Jack Foley, a doctor's handsome son. But heartbreak and betrayal would bring the worlds of Knockglen and Dublin into explosive collision. Long-hidden lies would emerge to test the meaning of love and the strength of ties held within the fragile gold bands of a... Circle Of Friends.

The Copper Beech
by Maeve Binchy

In the Irish town of  Schancarrig, the young people carve their initials--and  those of their loves-into the copper beech tree in  front of the schoolhouse. But not even Father  Gunn, the parish priest, who kn...