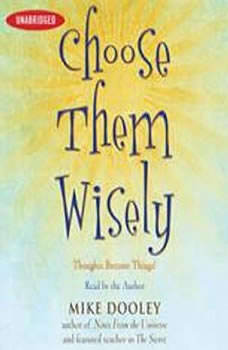 Living the life of your dreams isn't just about dreaming. It's also about living: following your impulses, turning over every stone, and stepping out into the world so that the wind can catch your sails. To those in the know, it's as if your dreams paint the picture and the Universe stands ready to bring it to life. Choose them Wisely is filled with the same inspirational messages from "the Universe" that made the Notes from the Universe trilogy so popular, but the thoughts have been expanded, containing even more information and concrete examples for how to actually apply these ideas to everyday life. Author Mike Dooley's conversational, inviting tone welcomes readers at every level of self-development into the wonder of their own self-directed futures.