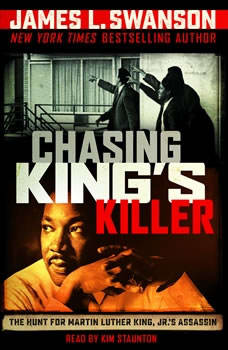 An astonishing account of the assassination of America's most beloved and celebrated civil rights leader, Martin Luther King, by NY Times bestselling author, James L. Swanson. In his meteoric, thirteen-year rise to fame, Dr. Martin Luther King Jr. led a mass movement for Civil Rights -- with his relentless peaceful, non-violent protests, public demonstrations, and eloquent speeches. But as violent threats cast a dark shadow over Dr. King's life, Swanson hones in on James Earl Ray, a bizarre, racist, prison escapee who tragically ends King's life. As he did in his bestselling Scholastic MG/YA books Chasing Lincoln's Killer and "THE PRESIDENT HAS BEEN SHOT!", Swanson transports readers back to one of the most shocking, sad, and terrifying events in American history.