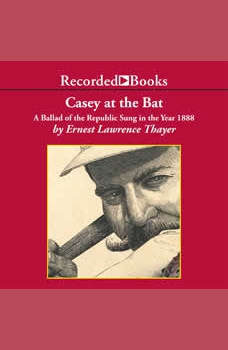 Casey at the Bat: A Ballad of the Republic Sung in the Year 1888

"The outlook wasn't brilliant for the Mudville nine that day; the score stood four to two with but one inning more to play." Thus begins one of the most famous poems in American history: Ernest L. Thayer's Casey at the Bat. When the powerful Mudville baseball team enters the ninth inning of their game behind by two runs, things seem pretty grim. And when the first two batters make outs, it looks like their best player, the mighty Casey, won't even get a chance to win the game for them. Then, two unlikely players get hits, and suddenly the crowd is cheering as Casey strolls to the plate. Casey's epic at-bat has delighted generations of readers young and old. Richard Poe's timeless narration captures the crack of the bat, the roar of the crowd, and all the thrilling excitement of baseball-and life.