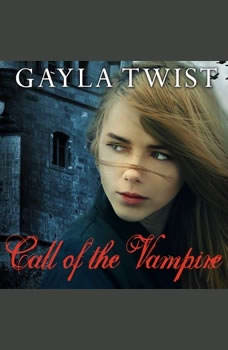 Call of the Vampire

Aurora Keys has dreamed of the Vanderlind Castle ever since she was a little girl. But the fiercely private Vanderlinds keep the massive structure strictly off limits to visitors. Until one night, the wealthy family throws a party, and Aurora's best friend, Blossom, devises a foolproof plan for the two of them to sneak in . . . At first, everything goes smoothly—but then the handsome Jessie Vanderlind sweeps Aurora into his arms, crushing her to his chest and whispering, "I knew you'd come back to me." Aurora understands it is a case of mistaken identity, but she feels connected to him somehow. And the boy is so beautiful, she believes she would be happy if he never let her go. However, once Jessie realizes he is mistaken, his smile quickly changes to a scowl. "You must leave," he tells her in a low, urgent voice. "Immediately. Come! I'll find a way to get you out." Unbeknownst to Aurora and Blossom, they have snuck into the home of one of the most prestigious vampire families in the world, and it is doubtful the two young women will ever be allowed to leave. Aurora's resemblance to Jessie Vanderlind's lost love just may be the only thing keeping them alive.

Tempted by a Vampire
by Susan Griscom

What do you do when your favorite rock star is a vampire?New job in San Francisco - CheckNew apartment - CheckEverything is just the way Maggie always imagined it would be until her gaze catches the sexy as sin lead singer of the house band at an el...

Neither Love Nor Money
by Giselle Renarde

Detta's employees like to spread vicious rumors about their boss sleeping her way to the top. They don't know how right they are, and neither does Detta's new pet, Max, until she seduces him while they're working late. She ties him up to show him ...

I have no specific recollection of how Cat came into my life. One day she was just there, lying on my bed. She seemed to know me. Did I know her? And, more importantly, did I know that surrendering to her lust for blood would turn me into a differen...