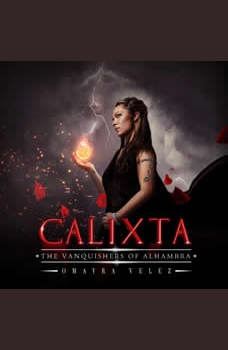 Calixta: The Vanquishers Of Alhambra

Series: The Vanquishers of Alhambra

Calixta is the first book in a new series, The Vanquishers of Alhambra. It is a real page-turner. Explore this dark new series where good and evil, honor and prejudices are blurred by a stroke of the pen. The poor souls in Alhambra live and die, shrouded under the long hand of their misguided faith and the influence of their trades. Come, indulge your imagination in this new book by Omayra Velez

Calixta lived stuck in the bottom of the social cast as a glorified gilded slave. However, she died, saving the lives of two innocent people. However, she was sent back to the land of the living, with some unique gifts. She knew she has a task to do; mages had to be protected. Evil was after her, and she knew she had to help others, but because society placed her on the bottom of the scales, her options were limited. She must fight back. She has the power, but could she overcome her place in society?

For years Vanquisher Dreyden had been looking for her, and he found Calixta in the worst of conditions. He helped her when she most needed it, but he was an arrogant fool. She almost roasted him alive.

Will Evil destroy what these two Vanquishers are trying to create? Mages the bringers of peace and order to chaos must be protected. However, Calixta and Dreyden are running for their lives, will they find all the members of their team? Will the next time she dies be the last?