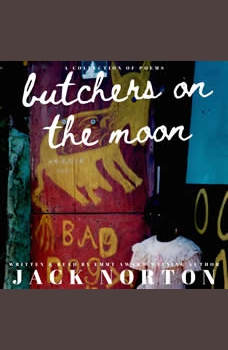 Butchers On The Moon

Butchers On The Moon was originally published as a 40 page manifesto of sorts from an impossibly young poet, songwriter and filmmaker from Minnesota named Jack Norton. Sold mostly at his concerts, only one copy of the original chapbook is known to exist today and can be found in the archives at the University of Mississippi in Oxford.

Jack burned all writings (poems, songs, short stories and a novel) he worked on before 2008, so these lost gems are a true treasure.

This expanded edition includes several additional poems written in the same period but not included in the original publication. An unpublished chapbook manuscript - The Well Ran Dry - was recently found in the archives of the editor of Fugawee Bird Press, publisher of the original Butchers On The Moon chapbook. These are also included within this edition.