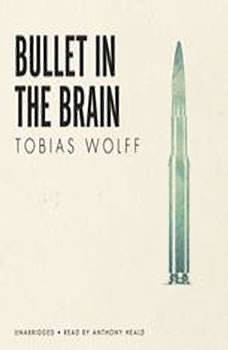 Bullet in the Brain

The story of a book critic and his final thoughts from short-story master Tobias Wolff Anders is an angry, cynical man. A book critic known for his scathing reviews, he finds any excuse to dismiss, belittle, or insult. This afternoon is no more agitating than the next. Angers finds himself in a long line at the bank, waiting to reach a teller. Even after two men-wearing masks and carrying guns-take control of the building, Anders is unfazed. It's this behavior that lands him with a pistol against his stomach and a man screaming in his face. And when the bank robber, indignant over Anders' behavior, shoots the book critic in the head, his mind floats through the memories of his life, settling on one particular event.