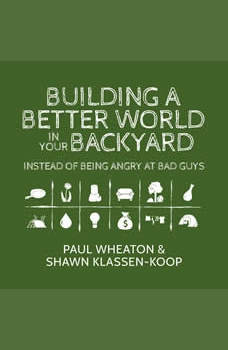 Building a Better World in Your Backyard: Instead of Being Angry at Bad Guys

Luxuriant Environmentalism Make a huge, positive, global difference from your own home! Prioritize comfort over sacrifice while saving thousands of dollars. Explore dozens of solutions and their impacts on carbon footprint, petroleum footprint, toxic footprint, and other environmental issues.

If 20% of the population implemented half the solutions in this book, it would solve the biggest global problems. All without writing to politicians, joining protests, signing petitions, or being angry at the people that are causing the problems.

Good solutions are often different from conventional environmental wisdom. The average American adult has a carbon footprint of 30 tons per year. Replacing a petroleum car with an electric car will cut 2 tons. But if you live in a cold climate and you switch from electric heat to a rocket mass heater, you will cut 27 tons!

Join Paul and Shawn on a journey featuring simple alternatives that you may have never heard of — alternatives which are about building a more symbiotic relationship with nature so we can all be even lazier.

Nurture nature and nature nurtures us all.
Recommended

Homesteading for Beginners
by Tom Sutherland

Get Your Way Out Of Financial Crisis and Start Living The Simple Way of Life You've Always Dreamed Of Through Homesteading NOW!The city life offers many opportunities for work and leisure. It lures many people in and keeps them satisfied – but...

How to Save the World For Free
by Natalie Fee

Are you worried about the effects of climate change on our environment? Want to help but don't know where to start? Environmental activist Natalie Fee's new handbook to green living will help you to make small lifestyle changes which will make a big...