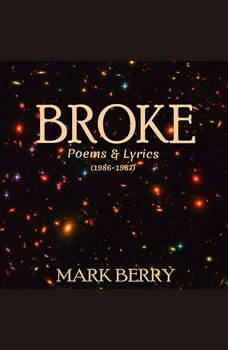 These poems were mostly written in 1987 while recovering in Clifton, Bristol in England. It heralded the start of a huge change for me, and I felt broken. The love of my life had just come to a messy end, and I’d been hitting the LSD too hard. Things felt beyond my control, and I now had to learn how to wait-out the wounds for the first time. I began to write, to compensate for the anxiety and emotional state that I was struggling with.***Bullets of Madness -I’m standing awaitingcaught in commotionas the voices call through a veilI hear them and fear themeven need rescuingthey make me aware of the nailthat drives through our senseswhen alone it commencesto obsess me in sweet delusionsthe nail it piercesmy heart as it fleecesthe last of courage from my mansionas I tasted the appleI quaked and my rattlefell out from my innocent handI learnt of your lessonsobeyed your deceptionsand was made to fit into your plansand now I can feelthe noise of the voidas the motion slows to a haltfeels like I’m dyingI’m scared of tryingto make sense just to please them allI was shot downas the black limousineslowed to a glistening haltthe devil climbed outhis gestures obscenemy fears all came bleeding outI knew he would laughas I fell to the groundhe had won the final boutshot with bullets of madnessor bullets of sadnessmy heart ached ‘til it wanted to stopI can’t understand youmy mind burns with fireI always just wished to belongalone is no homejust broken desireI’ve been shot down for being in love***Cover image copyright info: https://commons.wikimedia.org/wiki/File:Cosmic_fireflies.jpgSome colour filters have been added to effect the original.This file is licensed under the Creative Commons Attribution 4.0 International license.https://creativecommons.org/licenses/by/4.0/