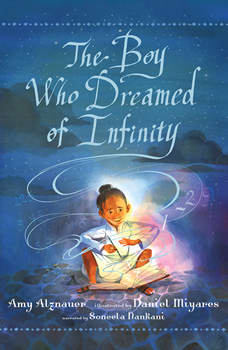 Boy Who Dreamed of Infinity, The: A Tale of the Genius Ramanujan

A mango...is just one thing. But if I chop it in two, then chop the half in two, and keep on chopping, I get more and more bits, on and on, endlessly, to an infinity I could never ever reach. In 1887 in India, a boy named Ramanujan is born with a passion for numbers. He sees numbers in the squares of light pricking his thatched roof and in the beasts dancing on the temple tower. He writes mathematics with his finger in the sand, across the pages of his notebooks, and with chalk on the temple floor. What is small? he wonders. What is big? Head in the clouds, Ramanujan struggles in schoolbut his mother knows that her son and his ideas have a purpose. As he grows up, Ramanujan reinvents much of modern mathematics, but where in the world could he find someone to understand what he has conceived?

Before I Was a Critic I Was a Human Being is the debut collection of essays by Amy Fung. In it, Fung takes a closer examination at Canada’s mythologies of multiculturalism, settler colonialism, and identity through the lens of a national art c...