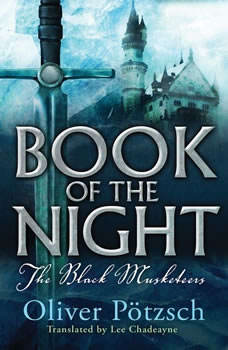 Book of the Night: The Black Musketeers

In this thrilling adventure by bestselling author Oliver Pötzsch, thirteen-year-old Lukas has been trained as a swordsman by his father, a nobleman who was once a famed Musketeer. When the threat of war and accusations of witchcraft spread across the land, Lukas’s life is forever changed. He flees his home and vows to find his missing sister.Surviving as an outcast, Lukas encounters thieves and mercenaries, a strange astrologer, and a master swordsman. He also meets three other fencers—Giovanni, Paulus, and Jerome. Each brings a special talent to their team that leads them to the Black Musketeers, the best fighters in the army. But living with the black-armored Musketeers is nothing like they imagined. In his quest to find his sister, Lukas learns of a legendary book that holds powerful magic. As he fights to keep the Book of the Night out of the hands of his greatest enemy, Lukas discovers the secrets of his own family and what it really means to be a Musketeer.

Confessions About Colton
by Olivia Harvard

CONFESSIONS ABOUT COLTON is a new release from Hachette Audiobooks: Powered by Wattpad - an innovative collaboration between Hachette Book Group, a leading publisher, and Wattpad, a passionate storytelling community of over 45 million people. Your ...