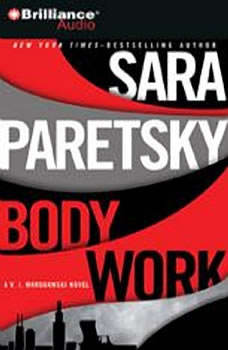 “The thing about Sara Paretsky is, she’s tough—not because she observes the bone-breaker conventions of the private-eye genre but because she doesn’t flinch from examining old social injustices others might find too shameful (and too painful) to dig up.” —The New York Times Book Review“Doctors take days off—why not PIs?” V.I. Warshawski demands. But when America’s hardest-working private eye goes clubbing, a stranger is shot and dies in her arms.V.I. has been visiting Club Gouge, Chicago’s edgiest nightspot, where a woman known as the Body Artist turns her naked body into a canvas for the audience to paint on.The show attracts all kinds of people, from a menacing off-duty cop to Ukrainian mobsters and Iraq war vets—and V.I.’s impetuous cousin, Petra. A tormented young painter shows up, too, and the intricate designs she creates on the Body Artist drive one of the vets into a violent rage.When the painter is shot, the cops figure it’s an easy collar—PTSD vet goes off the rails, stalks then kills young woman. But the vet’s family hires V.I. to clear his name, and the detective uncovers a chain of ugly truths that stretches all the way from Iraq to Chicago’s South Side.