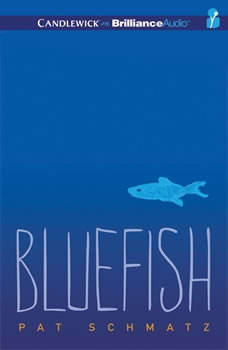 Thirteen-year-old Travis has a secret: he can't read. But a shrewd teacher and a sassy girl are about to change everything in this witty and deeply moving novel.Travis is missing his old home in the country, and he's missing his old hound, Rosco. Now there's just the cramped place he shares with his well-meaning but alcoholic grandpa, a new school, and the dreaded routine of passing when he's called on to read out loud. But that's before Travis meets Mr. McQueen, who doesn't take "pass" for an answer—a rare teacher whose savvy persistence has Travis slowly unlocking a book on the natural world. And it's before Travis is noticed by Velveeta, a girl whose wry banter and colorful scarves belie some hard secrets of her own. With sympathy, humor, and disarming honesty, Pat Schmatz brings to life a cast of utterly believable characters—and captures the moments of trust and connection that make all the difference.

A vacant lot, rat-infested, and filled with garbage, looked like no place for a garden. Especially to a neighborhood of strangers where no one seems to care. Until one day, a young girl clears a small space and digs into the hard-packed soil to plan...

The Gospel According to Larry
by Janet Tashjian

Josh Swensen is not your average 17-year-old. At the age of two, he was figuring out algebraic equations with colored magnetic numbers. He is a prodigy who only wants to make the world a better place. Josh’s wish comes true when his virtual al...