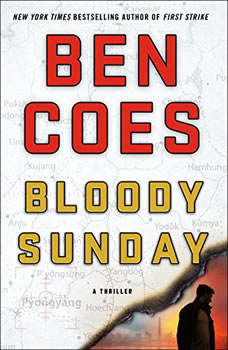 Bloody Sunday is the latest in Ben Coes's New York Times and USA Today bestselling Dewey Andreas series.North Korea, increasingly isolated from most of the rest of the world, is led by an absolute dictator and a madman with a major goal—he's determined to launch a nuclear attack on the United States. While they have built, and continue to successfully test nuclear bombs, North Korea has yet to develop a ballistic missile with the range necessary to attack America. But their missiles are improving, reaching a point where the U.S. absolutely must respond.What the U.S. doesn't know is that North Korea has made a deal with Iran. In exchange for effective missiles from Iran, they will trade nuclear triggers and fissionable material. An exchange, if it goes through, that will create two new nuclear powers, both with dangerous plans.Dewey Andreas, still reeling from recent revelations about his own past, is ready to retire from the CIA. But he's the only available agent with the skills to carry out the CIA's plan to stop North Korea. The plan is to inject a singular designer poison into the head of the North Korean military and in exchange for the nuclear plans, provide him with the one existing dose of the antidote. But it goes awry when Dewey manages to inject a small amount of the poison into himself. Now, to survive, Dewey must get into North Korea and access the antidote and, while there, thwart the nuclear ambitions of both North Korea and Iran. And he has less than 24 hours to do so—in the latest audiobook thriller from Ben Coes.Praise for Bloody Sunday:"Ben Coes' Bloody Sunday is a propulsive read with enough plot hooks, twists, and action to fill five thrillers...Fans of Brad Thor, Vince Flynn, and Tom Clancy will tear through Bloody Sunday and close the book counting the days till Dewey’s next adventure." — Mark Greaney, New York Times bestselling author of Agent in Place"Wildly entertaining...Coes takes a terrifyingly plausible scenario...Dewey Andreas is the hero these times demand, and Bloody Sunday is a heart-stopping thrill ride." — Joseph Finder, New York Times bestselling author of Suspicion and The Switch"A simple premise drives bestseller Coes’s excellent eighth thriller featuring indomitable CIA agent Dewey Andreas...It’s a complicated mission, and in the end only Dewey has the skills, courage, and sheer badass tenacity to pull it off. A ticking clock ratchets up the tension in the best entry in the series so far." — Publishers Weekly