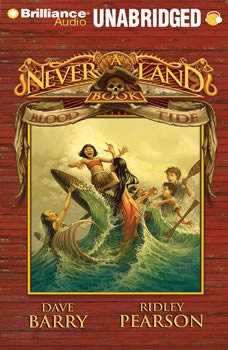 When an earthquake strikes Never Land Island, things begin to go terribly wrong. A mysterious barrel washes ashore and falls into the hands of Captain Hook, who hatches an evil plan.The once-peaceful mermaids, who have always been friends to the natives, have turned violent. When the mermaids injure some members of the Mollusk tribe, the warriors have no choice but to fight back.Meanwhile, the boys and Shining Pearl and Little Scallop set off on a secret mission to try to make peace with the mermaids. Instead, they’re captured, and while in captivity they discover the cause of the problem—Blood Tide is poisoning the lagoon and will eventually kill the mermaids.With time running out, the children must figure out a way to save the mermaids and to stop Captain Hook, whose plan threatens to destroy the Mollusk village and change life on Never Land Island forever.