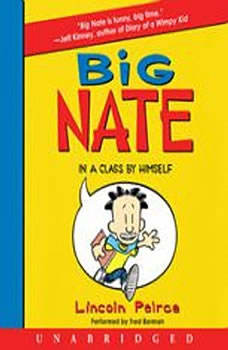 Big Nate: In a Class by Himself

Big Nate is in a class by himself!But things don't always go your way just because you're awesome.Nate barely survives his dad's toxic oatmeal before rushing off to school—minus his lunch.He body slams the no-nonsense principal.He accidentally insults his least favorite teacher, the horrifying Mrs. Godfrey (aka Godzilla).And school has barely started!Nate keeps his cool. He knows he's destined for greatness. A fortune cookie told him so.For fans of the ever popular, ever hilarious Diary of a Wimpy Kid series: Get ready to meet Big Nate!