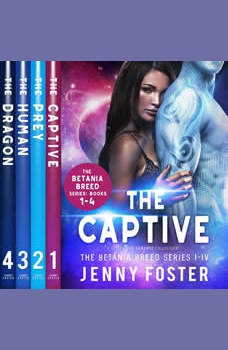 Let yourself be carried away to a grandiose SciFi world by USA Today Bestselling Author Jenny Foster. The original story "The Captive" led to a novel, and three additional volumes followed. With this collection you are finally holding all four Betania Breed single SciFi romance novels, mysterious background material included. In over 25 hours, you will be up close and personal on an adventurous and dramatic voyage through the universe.

I am one of the few people who hasn’t given up the fight against the Sethari yet. I would rather die than surrender to the aliens who have enslaved us humans for more than one hundred years. Then the unthinkable happens: I am awarded to the leader of the aliens, so I can bear him healthy, viable children.

Johar is the most merciless and successful bounty hunter there is. His reputation is legendary, for he has never let any prey slip through his fingers. His creator's beautiful daughter hates Johar and lets him feel it every waking minute. But Johar knows something about her that nobody else knows. Not even she herself.

Talon Delkhari was the mightiest warlord of his people, until he dared to contradict his king. Instead of granting him an honorable death, the king made him his chamberlain. His newest conquest is from Earth, and Talon is supposed to deliver her safely to his bed. An easy assignment. That's what he thought, anyway, until this human woman awakens the predator lurking under his skin.

Coran Burke is an elite undercover agent from Earth. The tough and emotionless fighter has never failed. His new mission leads him to Dassuria where he is pursuing a dangerous dragon lord. At the center of his investigation is a woman who has a lot to hide - but despite her entanglement with the dragon lord, Coran can't get her out of his head.

Dark. Powerful. Sexy. This will be a ride you won't want to miss.