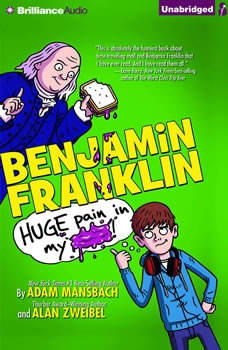 Benjamin Franklin: Huge Pain in My...

Dear Mr. Franklin,First of all, let me just say that this Assignment is Stupid. You are Dead. Why am I writing a letter to Some dead guy I've never even met?This is the start to a most unlikely pen pal relationship between thirteen-year-old Franklin Isaac Saturday (Ike) and Benjamin Franklin. Before the fateful extra credit assignment that started it all, Ike's life was pretty normal. He was avoiding the popularity contests of middle school, crushing hard on Claire Wanzandae and trying not roll his eyes at his stepfather, Dirk-the-Jerk's lame jokes.But all that changes when, in a successful effort to make Claire Wanzandae laugh, Ike mails his homework assignment to Ben Franklin...and he writes back. Soon, things go awry. After Ike has an embarrassing moment of epic proportions in front of Claire involving a playground, non-alcoholic beer, and a lot of kettle corn, Ike decides he needs to find a way to win Claire back. With some help from his new friend, B-Fizzle, can Ike get the girl and make his mark in history?

In this colonial adventure tale, set on the Pennsylvania-New Jersey border in 1768, Everett Shinn is enlisted in a search for two runaway indentured servants. Eager for adventure and to become a hero by capturing the runaways himself, 12-year-old Pe...

Fuck, Now There Are Two of You
by Adam Mansbach

Witty and truthful, this loving monologue outlines the fact that two is a million more kids than one-and as you probably know by now, you shouldn't read it to a child.