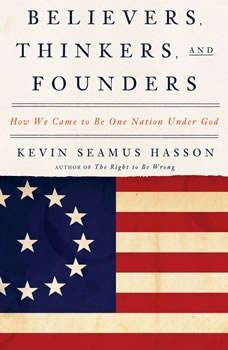 Believers, Thinkers, and Founders: How We Came to Be One Nation Under God

In Believers,&#160;Thinkers, and Founders: How We Came to Be One Nation Under God, Kevin Seamus&#160;Hasson &mdash; founder and president emeritus of the Becket Fund for Religious Liberty &mdash; offers a refreshing resolution to&#160;a familiar conundrum: If there is real religious freedom in America, how is it that our government keeps invoking God?&#160;He&rsquo;s everywhere &mdash; from our currency to the Pledge of Allegiance. Isn&rsquo;t that all entirely too religious? And just whose God are&#160;we talking about anyway? If we are intellectually honest, shouldn&rsquo;t we scrub all these references to God from our public life?Yet the Declaration of Independence says that God is the source of our rights. &ldquo;The traditional position,&rdquo; writes&#160;Hasson, &ldquo;is that our fundamental human rights &mdash;including those secured by the First Amendment &mdash; are endowed to us by&#160;the Creator, and that it would be perilous to permit the government ever to repudiate that point.&rdquo; America has steadfastly repeated&#160;that for more than 200 years, throughout all branches and levels of government.&#160;To say that there is no Creator who endows us with rights, Hasson argues, &ldquo;is to do more than simply tinker with one of&#160;the most famous one-liners in history; it is to change the starting point of our whole explanation of who we are as Americans&#160;and, ultimately, why our government is a limited one in the first place.&rdquo;&#160;What to do?&#160;Hasson looks closely at the nation&rsquo;s founding and sees a solution in the classical distinction between faith and reason.&#160;The existence of God, he points out, can traditionally be known by reason alone, while who God is can only be seen by faith.&#160;By recognizing the distinction between the &ldquo;self-evident&rdquo; Creator referred to in the Declaration of Independence and God as&#160;revealed in our faith traditions, we can move past the culture wars that plague us. In short, Hasson argues that we can have a&#160;robust First Amendment without abandoning our natural rights.&#160;In Believers, Thinkers, and Founders, Hasson examines that idea while looking at a host of issues &mdash; including the Pledge of&#160;Allegiance, prayer at public events, and the Declaration of Independence &mdash; as he demonstrates how we can still be one nation&#160;under God.

You and Me Forever
by Francis Chan

Marriage is great, but it's not forever. It's until death do us part. Then come eternal rewards or regrets depending on how we spent our lives.In his latest book, Francis Chan joins together with his wife Lisa to address the question many co...