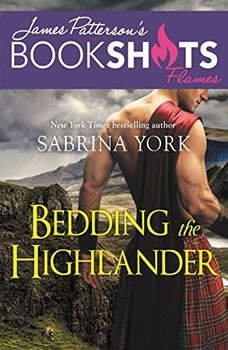 A 2018 HOLT Medallion Award WINNER!Only a Scot can steal her heart. There's nothing ladylike about Katherine Killin. She's a spitfire who cannot be tamed. To rid himself of her, and to honor a truce set by the Duke of Glencoe, her father agrees to wed her to his clan's mortal enemy, Ben Rannoch. But when Katherine meets the enticingly masculine Kirk Rannoch, brother of her betrothed, she suddenly craves domination. BookShots Flames Original romances presented by JAMES PATTERSON Novels you can devour in a few hours Impossible to stop reading

The Knight
by Monica McCarty

A novella set in the world of New York Times bestselling author Monica McCarty's Highland Guard series The year is 1311, and the battle for Scotland's independence rages on . . . Stripped of his lands by the English king who killed his father, Jam...

Betrayed by his father, Prince Kuresh earns his Highland name (Kai MacKay) and position as captain of the guard through loyal service and unshakable love for his new homeland. But now that he has found happiness in a new place, there's only one thin...

When Shona saves a warrior from an ambush, she feels compelled to heal his wounds. But when Ewan wakes, he ignites a desire in her she yearns to embrace. Staving off loneliness for years, she lets herself indulge in a night of passion, sinking into ...