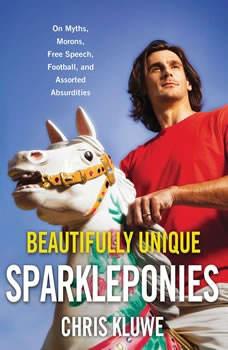 Hi. In your hands, right now, you hold the culmination of thousands of years of human intelligence, ingenuity, and brilliance. Now put your goddamn phone down and pay attention to my book. What is in my book, you ask? (I'm really glad you asked, by the way, because now I get to tell you.)Time travel. Gay marriage. Sportsballing. Futuristic goggles that DO NOTHING.Tiny brags from my publisher, stuff like: "This is an uproarious, uncensored take on empathy, personal responsibility, and what it means to be human."Excessive brags about myself: "An extraordinarily clever, punishingly funny, sharp-tongued blogosphere star, NFL player, husband and father, one-time violin prodigy, voracious lifetime reader, obsessive gamer, and fearless champion of personal freedom."Oh, and also an essay on the Pope's Twitter account. Honestly, if that doesn't draw you in, there's no hope left for humanity. I also give my own funeral eulogy, in case you were hoping I'd go away and die now!So please, join me in the glorious art of windmill tilting by reading this "collection of rousing, uncensored personal essays, letters, and stories" (I have no idea why that's in quotes).Join the herd of Beautifully Unique Sparkleponies.(You know you want to.)