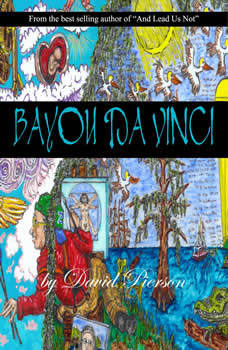 But there is a problem with the man because he is actually three people in one!

In addition to his “Bayou Da Vinci” persona, there’s also his madcap alter ego, “Mr. Z,” who often takes over in the middle of Wally’s classes. Mr. Z doesn’t talk to animals, inanimate objects and invisible people; he argues with them. However, he makes too much sense to be called crazy but is far too crazy to be considered sane.

And then there’s “I.” A dark soul, “I” is the identical twin brother of Wally (who doesn’t have a twin brother). “I” is the mirror image of Wally — except for the scar on his lower lip. This scar, which, instead of being on the left side — like Wally’s — is on the right side. Something else about the scar: It is more pronounced on “I,” as if it hasn’t healed as well as Wally’s scar.

Colt Harper hates it when you pat a cat the wrong way, or when you upload their faux pas to YouTube. In fact, he’ll probably kill you for it.As a self-proclaimed master vampire cat, Colt never imagined he’d be sent to community service a...

And Lead Us Not
by David Pierson

And Lead Us Not is a comic novel about Wally Zeringue, a high school drop-out who becomes President of the Untied States.Wally has enemies - among them, Dan Bitterman, a former classmate who is now a reporter for the President's hometown weekly...

Keila is the perfect revolutionary:Lacking things like intelligence, sanity or common sense,She has something far more important: plot armour and the telepathic help of Rangda, the evil space demon!Divine Space Gods II : Revolution for Dummies is da...

The Epiphany of Grace
by David Pierson

"The Epiphany of Grace" is a true story of a single mother's struggle to raise four children in the segregated South of the 1960s. Deserted after thirteen years of marriage Grace leaves California to return to her home state of Louisiana and is...

Confessions of a Teenage Drama Queen
by Dyan Sheldon

AN AMERICAN LIBRARY ASSOCIATION POPULAR PAPERBACK FOR YOUNG ADULTS! Now a major motion picture! Melodramatic, yet lovable Lola vies with her archrival for the chance to stand center stage at Dellwood High (ages 12 and up).Mary Elizabeth Cep (or Lola...