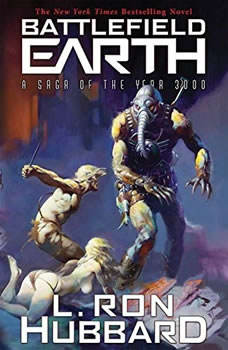 Suspense, politics, war, humor and intergalactic finance. A towering masterwork of science fiction adventure and one of the best-selling science fiction novels of all time, L. Ron Hubbard's Battlefield Earth opens with breathtaking scope on an Earth dominated for 1,000 years by an alien invader and man is an endangered species. From the handful of surviving humans a courageous leader emerges Jonnie Goodboy Tyler, who challenges the invincible might of the alien Psychlo empire in a battle of epic scale, danger and intrigue with the fate of the Earth and of the universe in the tenuous balance. "Tight plotting, furious action and have at'em entertainment." Kirkus Review