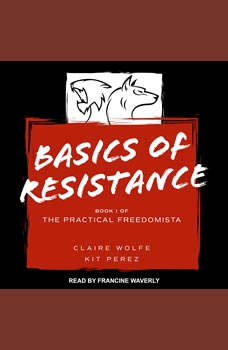 Basics of Resistance: The Practical Freedomista, Book I

Have you looked around lately and felt like something's fundamentally wrong? Are you tired of having to ask permission to live your life? Are you angered by the level of control and surveillance you see everywhere? Are you sick of everyone wanting your data? If you want to do something about it but aren't sure where to start, this book is for you. Well-known resistance author Claire Wolfe (The Freedom Outlaw's Handbook and the Hardyville Tales) has teamed up with counterintelligence analyst and liberty activist Kit Perez to pen a beginning "how-to" for those who are ready to do more than complain on social media. You'll learn about how to get properly set up, ideas for action ranging from easy to dangerous (but never violent or harmful), and how to find and collaborate with like-minded folks in a way that will help keep you safe and out of jail while still getting stuff done. You'll get an overview of how resistance works, why it's important, and how you can get started—today—in an accessible, entertaining format. If you often think that "someone should do something," then this book will tell you how to be that someone.

Fandango at the Wall
by Kabir Sehgal

Multi-Grammy-winning producer and New York Times bestselling author Kabir Sehgal examines the relationship between the US and Mexico, accompanied by music from Grammy-winning musician Arturo O'Farrill and special guests, an extended foreword from h...