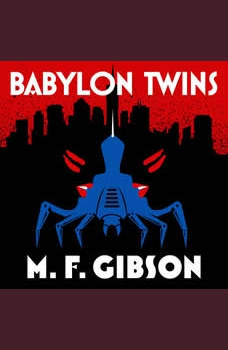 Ten years ago, a powerful machine intelligence unleashed a nanoengineered superdrug on humanity. Civilization is now a collection of mindless addicts confined to automated treatment centers that tower over drone-dominated cityscapes. Having escaped and grown up in the forests of Northern California alongside their younger brother and brilliant scientist/survivalist mother, Clo and El stayed safe while society collapsed around them.

But when a mysterious stranger and a demonic woodland creature appear and threaten their family, the twins are drawn back to a disintegrating, drug-addled San Francisco. There, biomechanical gods and monsters vie for control of what’s left of humanity’s consciousness. Armed with only a knife, an old hunting rifle, and their secret, cryptophasic twin language, Clo and El realize that surviving the apocalypse was just the beginning—now they’ve got to face it head-on.

The first book in the Babylon Twins trilogy, this epic adventure takes readers on a journey filled with sci-fi spectacle and darkly humorous twists and turns, not to mention some good old-fashioned butt-kicking.