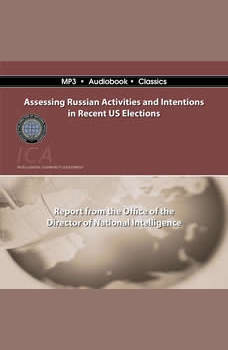 Assessing Russian Activities and Intentions in Recent U. S. Elections

Author: Office of the Director of National Intelligence

It is no secret that the 2016 United States Presidential Election was one of the closest, nastiest, and most contentious in the history of the country. The narrow victory of Donald J. Trump was an unprecedented upset, to say the least. The Republic party winnowed a field of 17 candidates down to a real estate developer and reality television star who appealed to large segment of the public that felt ignored by the established powers. The Democratic candidate, Hilary Clinton, was dogged with questions of trust and poor judgment stemming from her use of a private email server while serving as Secretary of State. When Wiki leaks released thousands of emails from the Democratic National Committee only an hour after NBC released a damaging recording of candidate Trump boasting of his sexual conquests and the Republican platform became surprisingly friendly to Russia, it became evident that extraordinary forces were at play and influencing the public conversation. After the election President Obama ordered the three major intelligence agencies to coordinate their findings during the lengthy election season and report them to key persons in the US Government. The classified report was shared with the Executive branch, the Congress and the President-elect in early January. A shortened declassified version with the same assessments was released at the same time. That report, entitled Assessing Russian Activities and Intentions in Recent US Elections, is read here verbatim. It reveals that the Russian activities were deliberate, extensive, and originated at the very top of the Russian government.

Existence Is Not Just Matter
by Osho

The first and the most important part of intelligence is innocence. That′s why you felt terrible – because in the world innocence and intelligence have been divided, not only divided but put diametrically opposite to each other. If intel...

*PLEASE NOTE: This concise summary is unofficial and is not authorized, approved, licensed, or endorsed by the original book’s publisher or author.*Short on time? Or maybe you’ve already read the book, but need a refresh on the most impo...