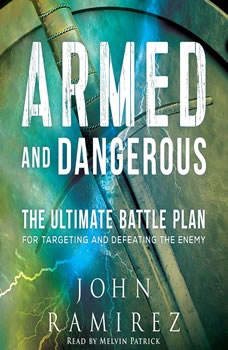 Armed and Dangerous: The Ultimate Battle Plan for Targeting and Defeating the Enemy

Jesus made it clear that the devil has come to steal, kill, and destroy. Hell is ready to unleash fury against every follower of Jesus. Yet many believers live in denial, letting the enemy steal their blessings, destroy their relationship with Jesus, and kill their hope.

But no more. It's time to put the enemy on notice!

With passion and insight gained from years on the frontlines of spiritual warfare, John Ramirez equips you with the biblical weapons and practical strategies you need to battle the enemy successfully, including how to
· discern and shut down the enemy's tactics and next moves
· fight with your God-given authority
· break free from destructive patterns and replace them with godly ones
· fortify your mind and heart against attacks
· take back what the devil has stolen
· grow in wisdom and maturity in Christ
· and more!

Here is everything you need to become armed and dangerous against every adversary that threatens your relationship and growth with Jesus. Through the power of the Holy Spirit you can destroy the power of the enemy and protect all that God has given you.

It's time to push back the gates of hell, advance the Kingdom, and live the life God designed you for.

A classic work on grief, A Grief Observed is C.S. Lewis’s honest reflection on the fundamental issues of life, death, and faith in the midst of loss. Written after his wife’s tragic death as a way of surviving the “mad midnight mo...

Success, money, true love, and the life you’ve always wanted. Many of us placed our faith in these things, believing they held the key to happiness. The recent economic meltdown has cast a harsh new light on these pursuits. In a matter of mont...

The Science of the Mind
by Ernest Holmes

The Science of the Mind was originally published in 1926 by the founder of the worldwide Religious Science movement. It was completely revised in 1938 by Ernest Holmes and Maude Allison Latham; this 1997 edition is the 1938 version with an added int...

The Zen master and one of the world's most beloved teachers returns with a concise, practical guide to understanding and developing our most powerful inner resource—silence—to help us find happiness, purpose, and peace.Many people e...

Sharpen your spiritual senses. God may be speaking in ways you don't expect.   This book is a manifesto for supernatural living, God encounters, and radical prophetic leading. You are standing at the doorway into greater dimensions of the S...

Peace Is the Way
by Deepak Chopra, M.D.

Deepak Chopra’s passionate new book, Peace Is the Way, was inspired by a saying from Mahatma Gandhi: “There is no way to peace. Peace is the way.” In a world where every path to peace has proved futile, the one strategy that h...

The Abolition of Man
by C. S. Lewis

In the classic The Abolition of Man, C.S. Lewis, the most important Christian writer of the 20th century, sets out to persuade his audience of the importance and relevance of universal values such as courage and honor in contemporary society....

Seedtime and Harvest
by Neville Goddard

Seedtime and Harvest is one of Neville Goddard's classic books in which he explains Biblical passages in light of modern metaphysical interpretation. Filled with powerful, timeless truths. familiar Biblical stories and passages provide insight into ...