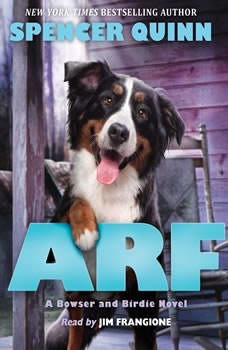 Arf: A Bowser and Birdie Novel

New York Times bestselling author and King of Canines Spencer Quinn is back with the next Woof book. BOWSER IS BACK! Bowser the dog is doing great. He's been adopted by Birdie, the greatest girl in the world, and he gets lots of love, lots of walks, and sometimes even bacon! But -- why is Birdie looking so worried? Who broke into their house? Why is the new girl in town digging into the old mystery of what really happened to Birdie's dad, a policeman killed in the line of duty? Bowser better keep his ears perked and his paws at the ready. A murder case that went cold long ago is fixing to get way too hot. Woof, the first Birdie and Bowser book, debuted on the New York Times bestseller list, and Bowser is back with all his signature charm (and slobber) in Arf!