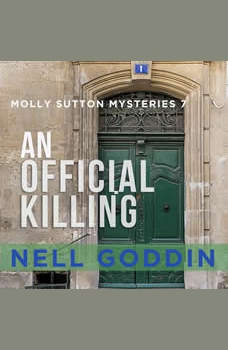 But a dark corruption is spreading underneath the surface. Unbeknownst to anyone but those involved, the village has been infiltrated from within and without. And Molly Sutton, the best detective in town, has her eye off the ball as she juggles her gite business along with planning her best friend’s wedding.

A shocking murder shatters the illusion of peace, and Molly and Ben jump into action. This time around, the more they investigate, the longer the list of suspects grows. Will Sutton/Dufort Investigations find the killer before he or she finds them?

An Official Killing is the seventh book in the Molly Sutton Mystery series. (If you read the series in order, you’ll enjoy character and relationship development, but the mysteries are standalone.) If expertly woven cozy mysteries, small-town life, and detectives with a taste for French food are your thing, Nell Goddin's tales of murder will be right up your street.

Come follow the twists and turns of the case along with Molly--get your copy of An Official Killing today!