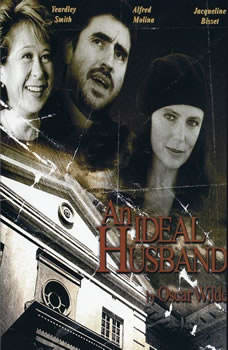 A tender love story, a serpentine villainess, a glittering setting in London society and a shower of Wildean witticisms are only a few of the reasons this play has enjoyed hugely successful revivals in London and New York. This 1895 drama also seems eerily prescient, as it explores the plight of a promising young politician, desperate to hide a secret in his past. With empathy and wit, Wilde explores the pitfalls of holding public figures to higher standards than the rest of us. Includes an interview with Michael Hackett, the Chair of the Department of Theater at the University of California, Los Angeles. In addition to his extensive directorial work for L.A. Theatre Works - which includes plays by Oscar Wilde, Tennessee Williams, and Noel Coward - Michael has directed for the Royal Opera, Covent Garden; the Royal Theatre at the Hague; and the Los Angeles Opera. An L.A. Theatre Works full-cast performance featuring: Rosalind Ayres as Lady Gertrude Chiltern Jacqueline Bisset as Mrs. Cheveley Paul Gutrecht as Vicomte de Nanjac Martin Jarvis as Sir Robert Chiltern Robert Machray as Phipps Miriam Margolyes as Lady Markby Alfred Molina as Lord Goring Jim Norton as Lord Caversham Yeardley Smith as Mabel Chiltern Directed by Michael Hackett.