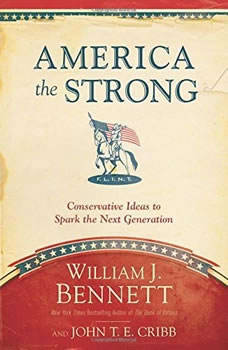 America the Strong: Conservative Ideas to Spark the Next Generation

What is F.L.I.N.T.? It&#39;s what makes America strong.We live in a culture that often dismisses and ridicules conservative values. By the time liberal professors, the news media, and Hollywood get through with them, many young Americans are convinced &ldquo;conservative&rdquo; means extremist and intolerant. It&rsquo;s a distortion that endangers America&rsquo;s future. Bill Bennett and coauthor John Cribb explain what conservatism really means, using five fundamental principles summarized by the word FLINT:Free enterpriseLimited governmentIndividual libertyNational defenseTraditional valuesAmerica the Strong shows the next generation how these principles have made the United States a great nation and why they are worth preserving. It answers more than one hundred questions, from &ldquo;Do conservatives hate the government?&rdquo; to &ldquo;What&rsquo;s wrong with having an open border?&rdquo; to &ldquo;Why can&rsquo;t rich people pay all the taxes?&rdquo;

April 16th. The year is 1963. Birmingham, Alabama has had a spring of non-violent protests known as the Birmingham Campaign, seeking to draw attention to the segregation against blacks by the city government and downtown retailers. The organizers lo...