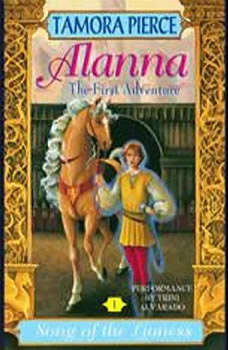 Alanna: The First Adventure: Song of the Lioness #1:

Series: Song of the Lioness #1

Becoming a legend is not easy, as young Alanna of Trebond discovers when she disguises herself as a boy and begins training to be a knight. Alanna's skills and stubborness help her befriend Prince Jonathan and alienate his evil uncle, Duke Roger. Filled with swords and sorcery, adventure and intrigue, good and evil, this book is a rousing introduction to the intensely satisfying story of Alanna.