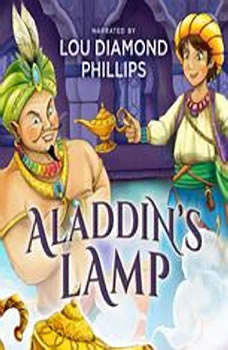 This production of "Aladdin's Lamp" is read by Lou Diamond Phillips, an accomplished actor with numerous film, television, and theater credits. Among his films are La Bamba, Young Guns, Young Guns II, and Stand and Deliver.The sorcerer can possess the magic lamp only if received from the hand of another, so he fools young Aladdin into going down into the secret cave to get it and bring it to him. Sensing that the sorcerer means to harm him, Aladdin keeps the lamp and discovers its magic when rubbed. A genie appears and makes Aladdin rich and powerful. Through trickery, the sorcerer gets the lamp back and robs Aladdin of all that he possesses, but with the help of a magic ring and its genie, Aladdin recovers all that is his and defeats the sorcerer.