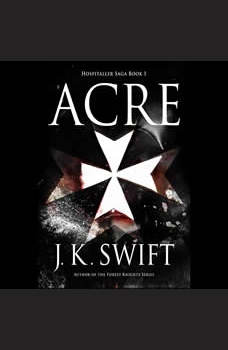 Brother Foulques de Villaret just wants to stay in Acre and perform his sworn duties. Instead, the young Hospitaller Knight of Saint John must undertake a dangerous journey from the Holy Land to a remote village nestled in the Alps, the ‘Spine of the World’. His mission: buy 500 peasant boys and return them to Acre to be trained as Soldiers of Christ. Pursued across the Mid-Earth Sea by slavers, Brother Foulques and his Army of Children are about to be thrust into a confrontation with the greatest warriors the East has ever known: the Mamluks. To survive, Brother Foulques must turn to risky alliances… and pray that his choices do not lead them all to destruction.

Acre is the first book in the Hospitaller Saga, a series of breathtaking historical novels set in the late 13th century. If you like action-packed adventure and authentically rich fiction, then you’ll love J. K. Swift’s historically epic masterpiece.